They say you finally get to know a city when your friends come to visit… Actually, I have no idea if that’s what they say, but that’s definitely what I like to preach.  Callie and Rachael’s visit to Barcelona was the marked in my calendar for a weeks and a 2 month countdown suddenly turned into a 2 day one.

First stop after they arrived, was a local tapas joint and we got there just in time.  While we didn’t completely beat the line, we got there before the wait exceeded 30 minutes.  I was so hungry, I  probably would’ve cried if we had to wait that long with hopes that they would take pity on us.  But luckily, it didn’t come to that point.

Look how happy Rachael looks! 😍 Those pimientos (peppers) must be good.  #veganlife

After stuffing ourselves with tapas and wine, we made it back home to prepare for the next day which would be full of football (RCD Espanyol vs Athletic de Bilbao) and culture.

That moment when you accidentally buy ticket to the visitor’s section?  We lived it.  But because we clearly were not real fans (yet), we didn’t have any Espanyol apparel on so we were able to blend in with the Bilbao fans.  And by blend, I mean, stick out as Americans.  But by the end of the match even though they lost to RCDE, the Bilbao fans had welcomed us with open arms and we learned the chants (or at least the basic sounds and olé!).  And how did we thank them?  By going to the official RCD Espanyol apparel shop after the game and picking up a few things 😂:

Next up in our day, some culture, and acquiring some more steps for our fitbits.

Rachael our official tour guide for the day, dropping some guidebook knowledge on us.

This was a prime example why it’s sometimes nice to have a guidebook with you.  Without it, we would have never known that these geese were in fact torture geese.  Each goose represents a form of torture that the Romans inflicted on a 13 year old Christian martyr, Saint Eulalia.  Learnin’ something new everyday…

We then ended their first full day in Barcelona with some authentic Catalan dishes and sangria, of course. 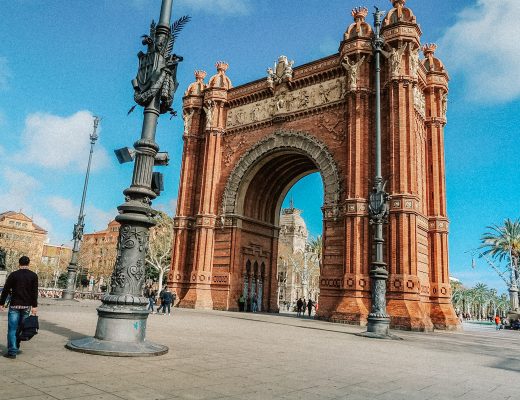 I'm an artist. Call me an artist

Cheetah Girls? Not so much...